The economy is principally agrarian. Farming is the main occupation of villagers. There are two brick chimneys in the village. The recent trend has been that many of younger generation are migrating to big cities, such as [[Patna]], [[Mumbai]], [[Surat]], [[Ludhiana]], [[Kolkatta]],  looking for employment. As a result of this, the income of individual household has gone up and living standards of individual family have become better.

Agriculture
From Imperial Gazetteer of India, Volume 11, it appears that sugar-cane, indigo and poppy were grown in the land of this and adjacent villages during and before British rule. Between 1800 and early nineteenth century, the cultivation of indigo and poppy was more prevalent. Maharaja of Darbhanga abandoned the cultivation of indigo around 1901, because the fall in the price of the dye, due to the competition of artificial substitutes, has caused many other factories to abandon. The chief feature of the indigo industry in Umaidpur regions, as compared with the other indigo-growing tracts in North Bihar, was the large area cultivated direct by the factories themselves in the Samastipur subdivision. The plant, when cut, was fermented in masonry vats and oxidized either by beating or by currents of steam. The dye thus precipitated wa boiled and dried into cakes. Due to the fall in the value of indigo, the factories have taken to the growing of ordinary crops, sugar kanes. The principal exports were rice, indigo, gram, pulses, linseed, mustard seed, saltpetre, tobacco, hides, and ghee; and the principal imports were rice and other food-grains, salt, kerosene oil, gunny-bags, coal and. coke, European cotton piece-goods, and raw cotton. Gram, pulses, and oilseeds are chiefly sent to Calcutta, and rice and other food-grains to Saran and Muzaffarpur. The imports of food-grains came for the most part from Bhagalpur and Nepal, coal and coke from Burdwary kerosene oil from the Twenty-four Parganas, and salt and piece-goods from Calcutta. 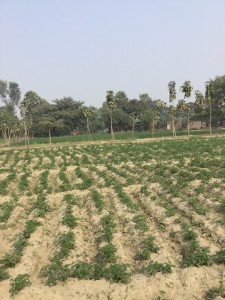 Most fertile part of the village, use to produce all the most valuable rabi and bhadoi crops. In the low-lying areas, the main crop grown is winter rice, though in some parts good rabi crops are also raised on the lands. Rabi and Bhadoi crops were grown from 1800 till recently (1980). Villages like Umaidpur were chiefly dependent on the Aghani (or winter) rabi and bhadoi harvests. The village land falls into two classes: Bhith (uplands) and Dhanhar (low lands where water logging occurred during rainy season). Bhith was further classified as saliferous land or usher (soils in which salinity is mainly due to accumulation of alkali salts are called alkali soils) was found in patches in the outer area between good land and low-lying land. Nunia caste from the neighbouring village, Nauachak, used to extract saltpetere in the summer after rabi crop from these lands for their living. In these lands small farmers grew mainly ‘Marua, also called mandua, nachini or Ragi’ or Finger Millets (Eleusine coracana), Kauni (foxtail milet) and Sama (kutaki or little milet). In Bhith land, wheat, maize, and miscellaneous food-grains which consisted chiefly of khesari, rahari, masuri, urd, mung, janera, and oats. Miscel laneous food-crops growns also included potatoes, and suthni (Dioscorea fasciculate). The chief non-food crops are oilseeds. Tobacco and Chilies are cultivated as commercial crops. Of the other non-food crops, kharhaul or thatching-grass was the most valuable, but now these lands are used for growing paddy.